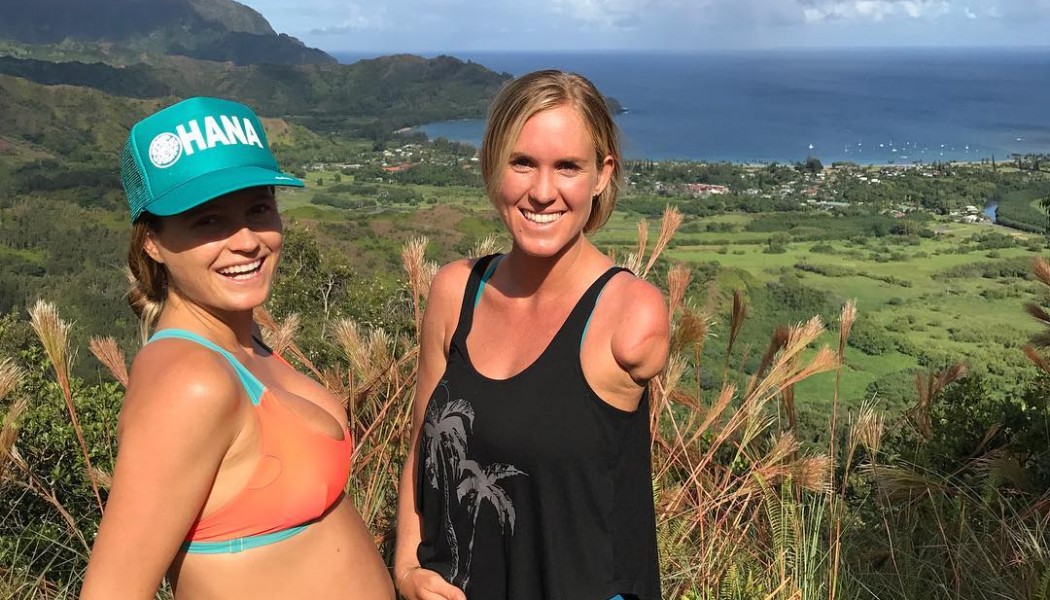 You’re probably familiar with the names Bethany Hamilton and Alana Blanchard by now. In 2003, 13-year-old Hamilton was attacked by a 14-foot tiger shark during a morning surf at Tunnels Beach in Kauai. Blanchard and family helped Hamilton to the beach where she was immediately rushed to the hospital. Hamilton ultimately survived the attack and returned to surfing sans her left arm.

On August 18, 2013 Hamilton married Adam Dirks in front of family and friends at a picturesque estate on Kauai’s north shore. In June of 2015, she gave birth to her son, Tobias Dirks. Hamilton transitioned seamlessly into the role as mother, spending plenty of beach time with her son as well as returning to competitive surfing just 3 months after Tobias’s birth.

“It’s definitely such a big adjustment,” Hamilton told PEOPLE magazine in a 2015 interview. “Even surfing, I’ll just be thinking of him. I’ll get back from the beach and I’m like, ‘Oh, I’ve missed you little guy.’”

Fast forward two years and Hamilton and Dirks are expecting baby number two. With the help of her husband and 2-year-old son, Hamilton, 27, announced via Instagram on October 8, 2017 that she was pregnant and the family couldn’t be more grateful.

On June 25, 2017 Alana Blanchard, 27, and her long-time boyfriend, Jack Freestone, 25, announced that they were 20-weeks pregnant with a baby boy. The photo was captioned: “We are so excited to meet our little boy at the end of the year. Still can’t believe we are on this amazing journey together.”

Blanchard lives on Kauai, Hawaii, and Freestone, also a professional surfer, lives on the Gold Coast of Australia. In a June 2017 interview with long-time sponsor, Rip Curl, Blanchard said: “We definitely want to be together as much as we can, so we can both be with the baby. But there definitely be times and places where the baby and I won’t be able to come. But everyone will probably see me around contests a lot more now. But I definitely still want to do my own stuff, and you know, I want to be a working mom!”

On December 1, 2017 Banks Harvey Freestone was born and rang in at 8 pounds 9 oz. With parents like his, it’s no doubt he’ll be turning heads in the lineup in no time!

“It was the best day of our life but what a journey,” Blanchard shared via Instagram. “I knew birth was going to be hard but wow that was so much more intense then I could of ever imagined. Women are truly amazing! I couldn’t of done it without Jack Freestone, he was there every step of the way. We are are so in love with this little guy.”

The next generation of surfers is here, we can’t wait to see how they’ll shape our sport.