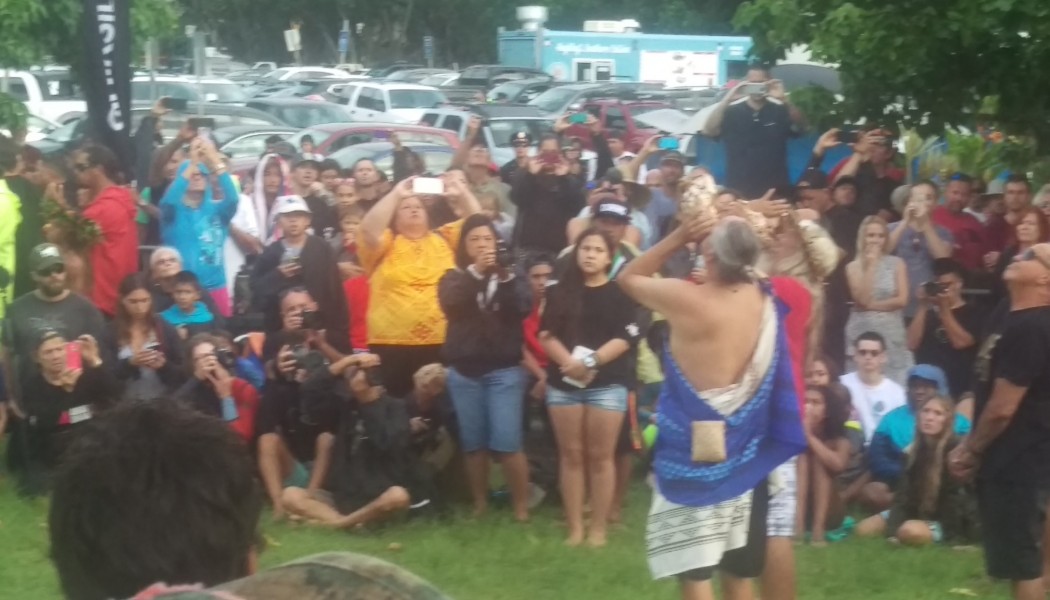 THE EDDIE WILL GO
The Skies Part for the Eddie Aikau Opening Ceremony at Waimea Bay – December 1, 2016

The opening ceremony for the Eddie Aikau Big Wave Invitational is always a special day – solemn, macho, Hawaiian, colorful, beautiful (and free grinds). Going back to 1990 I’ve attended quite a few of the opening ceremonies. Not all of them, but some of them.

The best one was in 2007, I think it was. Eddie Vedder was there milling about with all the surf stars and civilians. I chatted with him and asked: “Who are the most musical people?” In my experience it’s the Irish and Brazilians, but Eddie said: “The South Americans, because they sing the guitar solos.”

After the ceremony, Pearl Jam played a live set in Pikake Pavilion, up in the Waimea Valley. They rocked the house, to a crowd of a couple hundred people. During that show I videoed Eddie Vedder playing ukulele and singing “Soon Forget.”

That’s not a night I will forget any time soon.

And now, this year, the opening ceremony almost didn’t happen. But, just in time – on November 23 – Quiksilver and the Aikau family announced they had come to an agreement that would allow the contest to continue. It would have been a shame to cancel it, and end a long tradition of solemn, macho, Hawaiian, colorful, beautiful big-wave surfing that goes back to 1985 and included many magic moments: from Brock Little’s over the falls bomb and tuberide in 1990, Michael Ho and Bruce Irons kamikaze shooting the shorebreak and all the way to the Brock Swell last year, when an angry Waimea Bay opened a can of whupass on the world’s best big-wave surfers – but Happy John John flowed right through it, and came out smiling.

“We are proud to see the tradition of The Eddie continue without interruption, a testament to our respect for Eddie Aikau, the Aikau family, the Hawaiian people, and the community at large. We are very grateful for the efforts and support of the Aikau family and the World Surf League under the leadership of Paul Speaker who have all worked very hard with our team over the past few weeks to come up with a solution,” said Pierre Agnes, Quiksilver’s CEO. “Consistent with Quiksilver and the Aikau family’s wishes, we are pleased to confirm that the same stringent condition requirements we instituted when we inaugurated The Eddie 31 years ago will continue this year. We have every confidence that WSL’s greater involvement in the event this year will only improve The Eddie’s reputation as one of the world’s premier surfing contests.”

Just in time, Quiksilver and the Aikau family came to that agreement.

On December 1, I drove to the North Shore from Waikiki with Anthony Olegario and Anya Tarasenko. The surf was small along the North Shore and the weather was ooky – gray and gloomy and Seattle-like.

Arriving at Waimea Bay around 2:00, under the tent I found Peter Mel and Mark Cunningham going over their notes, rehearsing their lines and strategizing how they would MC the event. We were under the tent but getting wet. It started raining hard between 2:00 and 3:00, sending everyone under the tent, and causing a bit of concern about getting everyone standing outside with their boards and their lei and going through with the ceremony in a timely fashion so everyone could come back and grind.

But, just in time, the rain stopped and the clouds parted and the invited surfers and alternates grouped together on the grass wearing their lei and holding their big-wave guns: blessed by Hawaiian kahu, serenaded by Hawaiian men blowing conch shells, photographed by hundreds of different hands, there on the grass between a beautiful volcanic valley and the deep blue sea.

Speeches, songs, vibes. By the time the surfers and the crowd walked down the beach to paddle out, the clouds had parted, the sun was out, the sky was blue, the Bay was Golden Hour beautiful.

The surfers all paddled out escorted by swimmers and PWC. Unknown what they said out there, but it was nice to watch it all from the beach, as the sun set over Kaena Point.

Usually there is some kind of surf barely breaking on the reef at Waimea, which allows for a [email protected]#%## of the world’s best surfers to all take off on the same wave and cause all kinds of chaos and destruction.

Not this year. There were a couple guys surfing small Pinballs, but nothing beyond that. 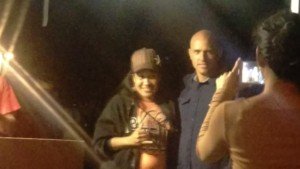 The surfers came back in, showered off and then everyone sat down to grind Hawaiian plates and listen to music, talk story, compare notes, catch up with friends and just enjoy the solemn, macho, Hawaiian, colorful glow at the mouth of a beautiful volcanic valley and the deep blue sea, accompanied by two dozen of the world’s best big-wave surfers.

At some point I saw John John Florence, briefly not being accosted by a dozen people, so I accosted him. 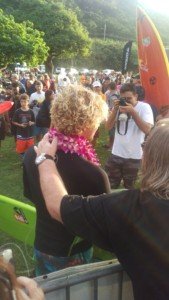