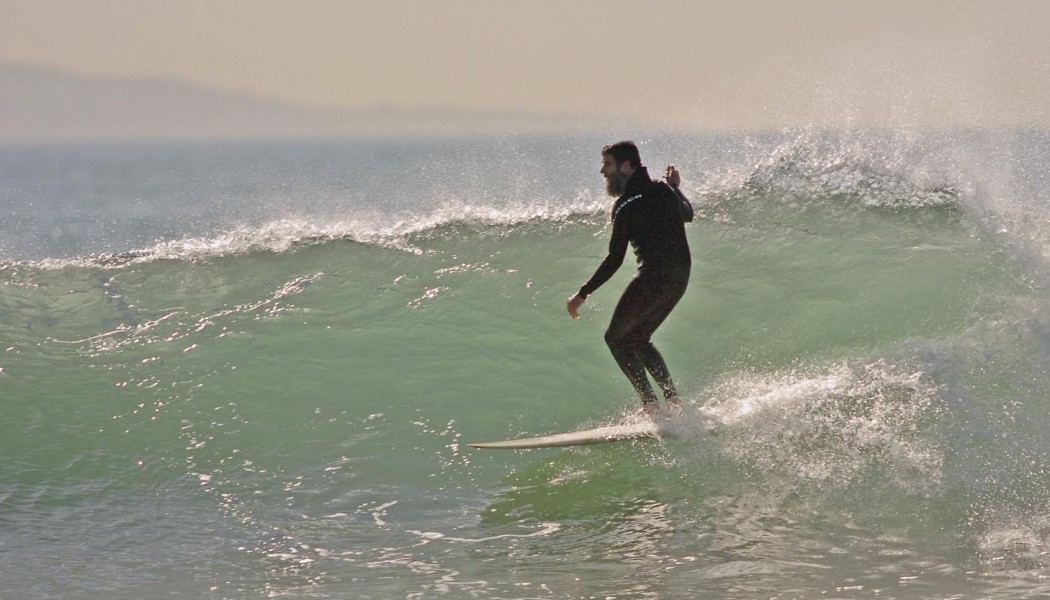 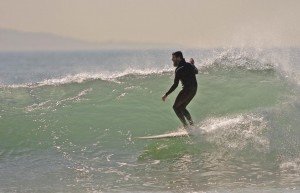 In January of 2017, Rabbi Nachum Shifren – Malibu’s surfing rabbi – came through Oahu – beard, yarmulke, bags and a sack of kosher foods. Rabbi Shifren was on a mission – to gather information, enthusiasm and support for a watermen’s competition designed for men and women over 65 years old.

We chatted in Waikiki and then he returned back to Los Angeles. Toward the end of February we e-communicated about the who, what, where, when and why of this event. 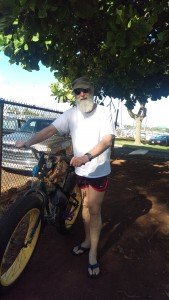 Hello, how are ya? Where are ya?

Life is good, cool actually. Stuck inside an iceberg made for Malibu surfers escaping PCH for the flatlands of Alberta, Canada. I took a chance remarrying the most beautiful woman on the prairie….now I’m shoveling snow, waiting for the swell to build in the Rockies…

What’s with the beard? You a hipster or something?

Well, I reckon I was somewhat of a hippie in the 60’s…guess if you weren’t you were in Nam…actually, I started studying the Talmud and decided if I couldn’t become a righteous person at least I could do the beard thing. If they’re gonna call me “Surfing Rabbi,” at least I should look the part, no?

Is that beard required in your line or work and thinking? What does the beard represent? Is it required in the Torah? Would you be excommunicated if you were to shave it off?

No…many cool people don’t wear beards. There is a prohibition from shaving with a razor, but not a shaver. I started my spiritual career, as you may know, with Lubavitch, so perhaps that’s why I am the way I am…no excommunication for me, unless I snake on Sarlo as he’s shooting the Pier…

Yeah don’t snake Sarlo. Hey I know a Jewish-Hawaiian joke. Maybe the only one in existence. You of all people will get it.

What did the elderly Jewish/Hawaiian woman say when she bent over to pick up a pineapple?

(Silence) You sure that’s the only Jewish Hawaiian joke in existence?

Is California still washing away from the rains?

If I didn’t know it, this is a repeat of the “40 days and 40 nights” rain of long ago. Haven’t heard of anybody building an arc…not yet. They’ll probably require an environmental impact statement for cruelty to animals. Anyway, this should be epic for Third Point sand bars…..if we don’t perish from the effluent of the creek. 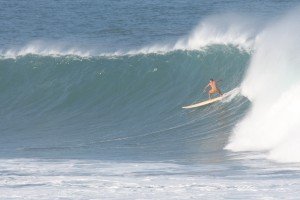 How has your winter been so far?

Not bad…just got back from Kauai and spent time with Felipe Pomar, a long-admired waterman who I was fortunate to meet and befriend. He took me out to surf Hanalei on the last big swell of January. It was giant, and I haven’t seen waves like that since my days on the North Shore in the early 70’s. So Felipe was kind enough to lend me his board: an 11’ 6” gun glassed with three layers of 10 ounce….it was nuts. I felt like a suicide bomber trying to drop into some of the fastest waves on the planet, with elevator drops to boot. The Hawaiian experience will always mesmerize us, no matter what our situation is.

So what’s the deal here, you want to have a contest for distinguished water gentlemen?

Yes….I/we are tired of competing with alpha 30-year-olds….we want to have a soulful reunion with old friends, now scattered around the globe, for a hurrah (last?) in which we compete with each other: surf, paddle, swim, run–and party at night at Duke’s of Huntington Beach and the ultimate luau, Hawaiian music, and salute our mutual love of the ocean and her waves and the waterman lifestyle of aloha.

I got to thinking: being an alumnus of Los Angeles County Lifeguards Association, there’s not a week that goes by when we don’t get bereavement notices about the passing of one of our watermen/lifeguard/surfer/friends. Those of us still keeping up the stoke, still living the dream, still staying in shape and pushing the clock of passing time back, must celebrate life – our blessed good fortunes – with our friends, wives, fellow watermen, and show the world what we do to serve as an example to others of a healthy, holistic lifestyle.

Tom Blake and Duke Kahanamoku armed and ready on the beach at Waikiki, circa one hundred years ago or so. Photo courtesy Don Love/Malama Pono.

This is very important to me. Not just surfing and chilling, but also to be a role model for others: seniors, and the not so seniors. I have long believed that the ocean/waterman lifestyle as exemplified by the Duke, Tom Blake, Tom Zahn (my mentor and coach), Pete Peterson, Eddie Aikau, Joey Cabell, and all those on whose shoulders we stand, have paved the way for our wonderful lot and good fortune. Let us share with others, show them a world of wonder, health, incredible fun and challenge, without abusing drugs, alcohol, and dysfunctional lifestyles.

As a 25-year veteran high school teacher in arguably the worst district in the Nation (L.A.), I have concluded that we need to do something for our youth that they’re just not going to get from educrats (read: bureaucrats dressed like teachers) destroying their minds and bodies. Let this be the year of the surfer, the watermen who have proven themselves by building strong bodies, bright minds, and live in harmony with the ocean and their fellow human beings. 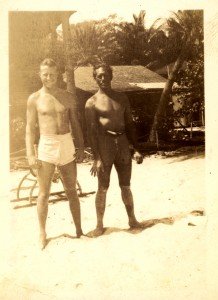 Where did the idea come from?

Well, years ago I spoke with Fred Hemmings about it in his office at the State Capitol in Honolulu…he told me he would support the concept. Time went by and I kept seeing more and more of my friends and fellow lifeguards passing away. So, I made a move: Called Shaun Tomson, who further inspired me and encouraged me. Truthfully, whomever I would talk to, would give me the extra drive and incentive to bring this project to fruition.

Don Love up in San Francisco – who is the caretaker of Duke’s archives – was fantastic with his time and efforts on our behalf. Brett, manager of the Duke’s in Huntington was so magnanimous, offering to host our athletes and provide an unreal luau for all. Congressman Dana Rohrabacher (Huntington Beach) offered his help as well. Even Corky Carroll offered to pitch in….

How has it evolved in terms of location, dates, players, etc. What were your original ideas, and how have they changed?

I had the original thought of doing the International Masters Ocean Championships (IMOC) at Sunset Beach on the North Shore, where it all started. Mike Takahashi, long-time Sunset man and waterman/masters swimmer/ and competitor offered his advice: avoid the Hawaiian bureaucracy and do the race instead on the Mainland. I knew Huntington would be the place, a relatively centrally located venue. I spoke with the beach permit people and got the only date open to us: Oct. 22, Sunday, 9 am. Glenn Hening (Surfrider Foundation founder) gave me wonderful counsel about the minutia that needed to be attended to put on such an event.

It is rather overwhelming. The red tape gets in the way of the stoke, but no worries, we’re on target and moving forward nicely.

Allie Brown of “Sup-Connect” was kind enough to post our event for all the SUP paddlers in the world….that was great.

Felipe Pomar and Tom Woods of Kauai have been so gracious with their time and advice as well. I see us having a great first year and making a successful event…perhaps Hanalei will be next year (may we all live to attend!).

Jock Sutherland spoke with me at length as was so inspirational. He promised to be there. Andy Neuman (former Malibu Invitational winner) promised to show up – bum leg and all. I started surfing 55 years ago and it seems I’ve never grown old…I am still stoked like crazy after all these years. I see now that without that attitude, there is no way to pull off such an involved, circuitous extravaganza–and make it a success where people have a blast and strengthen bonds with fellow watermen/waterwomen from all over the world

At one point I suggested Waikiki because there’s no better place to be in the water, but you decided on Huntington Beach – a place I’m not too fond of.

You came to Hawaii in January to talk to some people on Oahu and Kauai. Where did you go? What did you see? Who did you talk to? Did you get some surf? How did that Hawaii trip move it forward?

Don Love told me to meet Jim Fulton, media coordinator of the annual Duke’s Ocean Festival. We met at the Ilikai, had a beer, and he proceeded to give me tremendous counsel about creating the event….even hinting that the Duke’s Ocean Festival might also be interested in assisting…we’ll see. But it would truly be a natural match. Jim topped off the evening by giving me a ride to the airport! A classic guy.

As mentioned, Felipe Pomar navigated me through the reef at Hanaei on an insane day of huge barrels,and closeouts from Hell….all the while on his SUP, dominating the outside line-up at 72 years of age. It doesn’t get more inspirational for a young guy like myself.

I left Hawaii bolstered by the advice from the personalities with whom I spoke, motivated to finish the job that I intended to complete.

What is your idea for the format of this event? What competitions? Length, time, etc.

It’s simple: the International Masters Ocean Championships will be a meeting place for the best athletes in the world, whose vision of aloha, fun, dedication, and challenge will serve as a model for others to emulate. We don’t TALK the WALK, we do it by competing in the following: one-mile paddle; 1000 yard swim; one-mile run, and surfing competition. We are promoting the event in a way that each participant will take on each event, but at our age, who knows? Mostly, this is a demonstration of our soul and aloha spirit in every aspect of our lives. The reunion as posited is going to be one heck of a great time!

Who have signed on for sure?

Felipe Pomar, Don Woods (Kauai), Mike Takahashi, Jock Sutherland, Andy Neumann, myself, and some guys who didn’t leave their contact info as of yet….

We haven’t started our promotional campaign yet. The word of mouth has it that dozens of waterman will be flying in from the east coast and even British Columbia. We’ll keep everybody posted about registration. ….

Who are your co-sponsors?

We have contacted several heavy hitters and are confident they’ll see the tremendous good vibe of the event and sign on. Any suggestions?

Well let’s get this interview out on the wire. Hoist it up the flagpole and see if anyone salutes it.