The Quiksilver Pro Gold Coast and the Roxy Pro Gold Coast are into the fourth day at Snapper Rocks in Queensland, Australia, but the contest is moving forward without a lot of favorites.

Kelly Slater loooooves surfing Snapper down to Kirra and has done well at this contest over the millennia. But the Champ withdrew from the event to let his foot heal, saying on Instagram:

Thank you to everyone supporting me on the Gold Coast all these years and wondering where I am right now as my heat begins at the #quikprogoldcoast2018. If round 2 men’s does not run tomorrow, I will most likely make it to surf my heat. If it runs tomorrow, @mikeyfebruary will take my spot and best of luck to him. I had surgery 3-1/2 weeks ago and am not quite out of the woodwork yet. I was looking forward to having what could be our final heat together with @mfanno but I’ve only surfed 4 times since my latest surgery while getting work on the foot and letting it heal. If I do show, I’m not expecting my best performance but with some wave luck and tubes, I’ll have some fun. Thanks to the @wsl for keeping me in the draw (as per the rules, of course). I look forward to competing again soon and back to full health hopefully in the coming months.

Mick Fanning is surfing in his last Quiksilver Pro after announcing he will retire after the Bells Beach contest. Fanning went down to Brazilian rookie Tomas Hermes and Australian Owen Wright in small surf during Round Four. Fanning has been a pro surfer for 17 years, won three World Titles in that time and also bitch-slapped a white shark at J Bay – among many other feats. 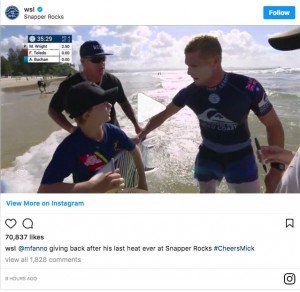 When Mick Fanning left the water and walked up the beach after his final Quik Pro heat, he gave his board to a fan wearing one of his jerseys.

On his Instagram, John John Florence posted a photo from the warmups, showing him carving as a guy behind him pearl dives. JJF busted out some Sun Tzu philosophy from The Art of War to explain his mindset for the contest: “The whole secret lies in confusing the enemy, so that he cannot fathom our real intent.”

Sounds like Donald Trump has been reading The Art of War as well, but while that philosophy seems to be working for Trump, it didn’t work for JJF in this event, as he fell victim to Snapper Rocks, going down to Mikey Wright in Round Two. His equal-25th finish is his worst result since Lower Trestles in 2015.

Going into the quarterfinals, there is an even mix of known and new faces. 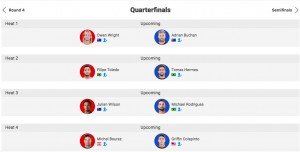 During the warmups for the Roxy Pro Gold Coast, Carissa Moore posted a Funny Foto of her dropping in on a local bloke, who was so shocked to be so close to the champ, he wiped out into a face plant. 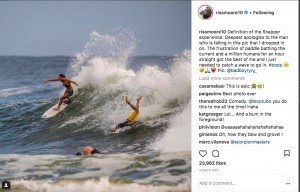 Carissa Moore and friend during warmups for the Roxy Pro Gold Coast.

But Carissa Moore was gone by the quarterfinals, along with Steph Gilmore and Tyler Wright.

The Roxy Pro Gold Coast is now into the semifinals, and these four women are the draw.