How the World’s Greatest Movie Star Inspired the Short Board

Tommy Zahn was the world’s greatest surfer, because he ____ Marilyn Monroe.

Gerry Lopez –as quoted in The Surfer’s Journal 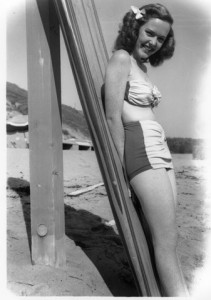 History bounces funny. Opportunities are missed, opportunities are made, people zig when they should zag, sometimes they end up in the mud, sometimes they make history. Around Malibu, there are a lot of surfers riding a lot of different surfboards, but all of them can trace their ancestry back to a time in the late 1940s, when California surfers were going fast on 11-foot boards that weighed as much as 100 pounds – but they wanted something different. That something different was inspired by a woman who was surfing around Malibu, and if history had bounced a little differently, that woman could have been Marilyn Monroe.

Sweet Sixteen is my title for a found reel of late-40s surfing footage that was discovered in Malibu in 2004. Sweet Sixteen stands for the 16 minutes of 16 mm film shot by a Malibu resident named John Larronde – although surf historians who have seen the footage think it was shot by God, because whoever filmed those epic overviews of empty, perfect Malibu and Rincon and double overhead Ventura Overhead reeling both ways, not only knew how to handle a film camera, they also knew what surfers and spots and boards and jalopies and girls would make surf historians do backflips, 60 years later.

Norma Jean Baker at a San Onofre beach party circa 1947, with Whitey Harrison, Pete Peterson and Jackie Coogan/Uncle Fester. Norma Jean got a nose job around this time, and was christened “Marilyn Monroe” a few years later – in Malibu, by friends. Black and white Xerox of a photo from the John Larronde Collection at the Ventura County Museum.

Sweet Sixteen has several shots of a tall, strong Nordic man tandeming from the top of First Point to the beach with a svelte, pretty woman in a bathing cap standing on his shoulders. The man is Pete Peterson, and the woman…. Well it’s not Marilyn Monroe and that’s a shame, because it could have been. And if things had worked out a little different back then – and certain guys had dated certain girls – Marilyn Monroe might have had a profound effect on surfboard design as the girl who inspired the short board.

Gerry Lopez once called Tommy Zahn, “the greatest surfer in the world… because he _____ Marilyn Monroe.” You can fill in that blank as your sensibility allows, but that might have been true. Zahn was a first-rate waterman who was movie star handsome. He and Norma Jean Baker where hired at 20th Century Fox at the same time, and it was a love triangle between Zahn, Norma Jean and Darrilyn Zanuck – the daughter of studio heard Darryl Zanuck – that got both Norma Jean and Zahn fired from the lot.

Pete Peterson on guitar, Dave Rochlen on ukulele and a pretty bobby soxer named Norma Jean Baker with a jacket over her shoulders. Los Angeles beach party, circa 1947.

Regarding Norma Jean Baker, Tommy Zahn was quoted in the book Goddess: The Secret Lives of Marilyn Monroe by Anthony Summers: “She was in prime condition,” Zahn said. “Tremendously fit. I used to take her surfing up at Malibu-tandem surfing, you know, two riders on the same surfboard. I’d take her later, in the dead of winter when it was cold, and it didn’t faze her in the least; she’d lay in the cold water, waiting for the waves. She was very good in the water, very robust, so healthy, a really fine attitude towards life. I was twenty-two when I met her, and I guess she was twenty. Gosh, I really liked her.”

Craig Stecyk told a similar story: “A strikingly beautiful woman approaches Dave Rochlen on the beach and inquires as to the maker of his surfboard. He informs her that he builds his own and she responds that she would like to place an order. That evening, the lady shows up at Rochlen’s-board building area (located in his girl friend Honey Bear Warren’s garage) with her husband in tow. The man orders up one as well, and is a friendly sort. This fellow finds it interesting that Rochlen is crafting surfboards in the garage of the Governor of the State of California. Dave finds it noteworthy that the fellow is none other than matinee idol, Gary Cooper.”

Another tale is told of Tommy Zahn and Dave Rochlen surfing Malibu Point on August 16, 1947; a continuation of the Marilyn Monroe story: “The point. Evening, full moon. Two surf dogs do a double date in a 1934 Ford Roadster, with boards in the back,” wrote Craig Stecyk. “The men: Tom Zahn and Dave Rochlen. The women: Darrylin Zanuck (daughter of ‘movie czar’ Richard Zanuck) and Norma Jean Baker. Tom and Darrylin have fixed ‘Rocky’ up with Norma Jean Baker, later to be better known as Marilyn Monroe.”

Apparently Zahn and Norma Jean and Zanuck got that love triangle patched up, so it was Darrilyn Zanuck and not Norma Jean Baker/Marilyn Monroe who would prove to be the Eve of the modern shortboard.

Babe on board. Marilyn Monroe on the beach, 1950s.

In Sweet Sixteen, there is a shot of three people sitting on the beach, two men playing ukuleles and one girl between them, looking at the guy on the left. He’s Tommy Zahn, tan and fit and looking like a movie star. After that, there is a shot of a woman paddling into an inside wave at Malibu on a shorter board, getting clumsily to her feet and then riding with style down the beach. Is that Darrilyn? And is that the Darrilyn board?

During the summer of 1947, Tommy Zahn asked Joe Quigg to make a “novice girls’ board” for Darrilyn. It had to be short and light, easy for a girl to carry and it had to fit in the back of a Town and Country convertible. Thinking about Darrilyn Zanuck many years later, Joe Quigg said to Malcolm Gault-Williams: “She probably thinks of herself as the original Gidget. She was at Malibu, really the first girl to buy a surfboard and buy a convertible and stick the surfboard in the back and drive up to Malibu and drive up and down the coast and learn to surf. Of the Malibu girls she was the first Malibu girl to really do it.”

Joe Quigg and Tommy Zahn, in Hawaii and jazzed, some time in the 50s.

This was a special board for his best friend’s girl, so Quigg picked the best redwood and balsa from five different lumber yards and made a 10’ 2” redwood/balsa with 50/50 rails, curved rail rocker, a flat planning bottom and a fin. The board was soon nominated “the loosest board on the West Coast” and you wonder how much Darrilyn actually got to ride it. As the story goes, after Zahn and Darrilyn broke up, Darrilyn pulled a commando raid on Zahn’s garage to get the board back.

Marilyn Monroe strikes a pose with a board that would be worth $10,000+ these days.

In August of 1947, the Los Angeles surf crew took a surfari down to San Onofre. Dave Rochlen, Kivlin and Pete Peterson borrowed that “novice girls’ board” and proceeded to invent California hotdogging, right then and there. The board was faster and more maneuverable than anything else in the water. “It is immediately apparent that Rochlen is turning four times faster and making it into and out of what would previously have been inconceivable situations,” Craig Stecyk wrote. “Pete Peterson next borrows the board, and is instantly banking and turning in an obvious departure from his patented power trim, runaway style. Kivlin is intrigued and promptly decides to have one for his girl friend.”

The board is even lighter than the most advanced Simmons model – maybe because Simmons still thought heavier boards were better. Quigg said the board had “the complete combination” and he called it The Easy Rider: “I’d been building girls’ boards since early ’47,” Quigg said to Paul Holmes. “It helped the girls to leave the tails wide. I’d put what I called easy-rider rocker in them. They were real easy to ride. A lot of girls learned how to surf on those boards in just a few months.”

Matt Kivlin cruising along a lovely Malibu wall, circa 1948.

The Darrilyn Board is considered the Eve of modern shortboards, because it was at that point that the best surfers in California figured out that less was more, that they didn’t need 11-foot, 100-pound planks to make waves from the flagpoles to the pier. That same year, Quigg, Kivlin and Zahn took their first trip to Hawaii. On the way over, Quigg sketched out a narrow board with a pintail, which Quigg thought might be good for speed on those bigger days at Malibu and Rincon.

From there, surfboards transformed fast from planks, and inevitably to plastics. And if Tommy Zahn had changed his dating habits a little, the mother of all modern shortboards could have been one of the greatest of all American movie stars.