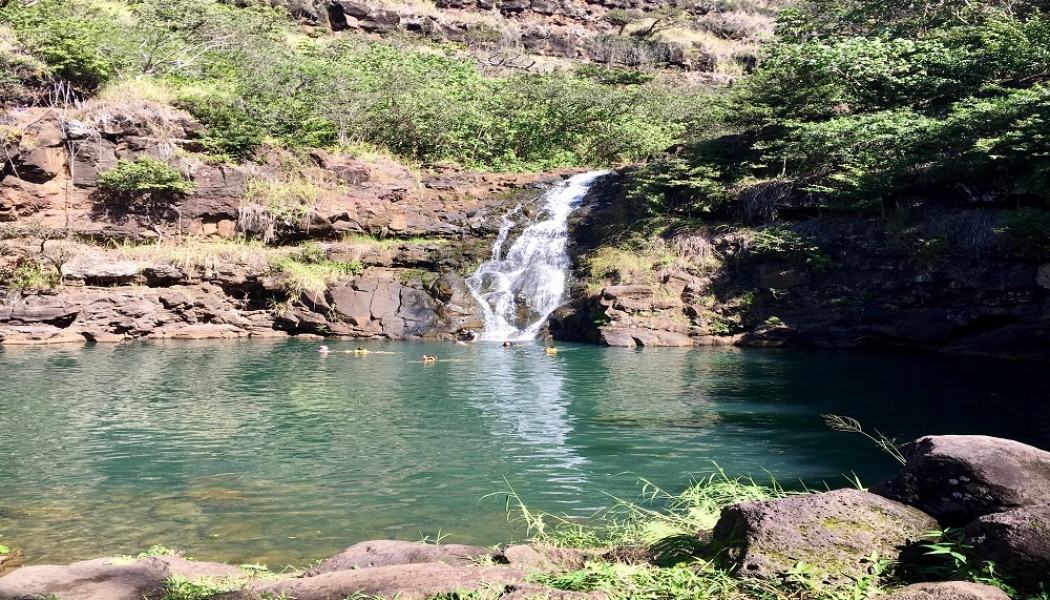 The two-lane scenic highway wraps around Oahu with mountains in one hand and sandy ocean in the other. Leave Honolulu’s skyscrapers behind and head into the greenery’s golden hour as the sun touches the ridge tops. Just beyond, the North Shore break can be seen. The ocean bottom covered in reef structures, holds breaking waves a good paddle out. Driving around the north side of the island, keep an eye on surfers in between beach houses, chicken farmland, and parking lots. Not that the parking lots stop the pick-up trucks with piled surfboards on the side of the road.

One of the first stops along the Kamehameha Highway is the town of Haleiwa. Haleiwa has become a known hub for Hawaiian memorabilia and the perfect spot for killer veggie nachos from Uncle Bo’s Pupu Bar & Grill. Art galleries and shaved ice keep foot traffic constant here. Along with surfers, of the mortal variety, finding waves that are not as life threatening as Pipeline or Sunset beach. Paddle boarders also drift along the Haleiwa River under the famous rainbow bridge. These two small white arches hold squatters catching some sun or connect shoppers to Hawaii’s oldest surf shop of Surf N Sea. A board or t-shirt that fits your style can be found amongst the historic shops in this area. Wave goodbye to the economic hub of North Shore as you pass Haleiwa’s iconic sign telling the “food, gas, shops & beaches” it has to offer.

The next turn passes a land intake holding a relaxing beach at Waimea Bay. It’s a sight to see tucked in the hills of the island. The waves here have been shredded since popular big wave surfing in the 1950s. A first named surfing beach heading up the North Shore, “Best of Oahu” reports these wave’s front side peaks to sometimes reach 60 feet. The beach’s rocky edges have also been seen as a local spot for cliff jumping or rock climbing. The sand stretches back inland till it almost touches Waimea’s botanical garden. The garden has walkways surrounded in flowers and vegetation history. Then, jump into the cold, deep depths at Waimea’s waterfalls towards the end of the tour. Once walking through hibiscus’ petals and lily ponds, put on a life vest and anyone can swim underneath. 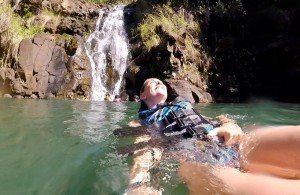 Sunset elementary school stands a landmark to tell that you are moving in the right direction. The school’s field faces the water with the building painted in the break. Even at a young age, the pillbox hike that overlooks the North Shore is an escape route from the morning bell. The trail begins in the school’s parking lot leading up to a complete North Shore overlook. Across the street of course, is Banzai Pipeline.

Most people dodge passing cars from the highway, to cross over and be a part of the world’s most famous surf destination. There are large memorials and crowds waiting to catch a glimpse. After finding a sand spot amongst the spectators, the Volcom Pipe house chants are heard as they cheer on their teammates. Watching as sponsored surfers come and go from the house awaiting their turn to slay the beastly waves. The strong tides and extremely shallow reefs make the waves picturesque and dangerous. Photographers wear life vests covered in rash guards and wetsuits only to jump head first into the white crumbling water tons. Their huge camera housings and fisheye lenses held in hand.

Surfer Today follows the “pipeline” name back to an 80-foot wave with surfer Phil Edwards, captured by legendary filmmaker Bruce Brown in 1961. Later to be seen in movies worldwide. Today, the crowd keeps the spirit of Hawaii alive sun bathing and sending shakas to gnarly catches. Collective oohs and ahhs always chime in to make updates on the wipeouts. The sun starts to set and the endless wave break continues. Their arms have paddled farther than most people could run. Waving goodbye in the wind with the image of the Hawaii’s native Iwa bird on red flags everywhere. These cheer on local professional surfer John John Florence reading “Go John John.” There’s other local pro Koa Smith juggling boards out on the street and American surfer Kelly Slater catching some surf down at Waimea.

The most beautiful part is, these professionals are respected community members in the creation of sand castles and being covered in Sex Wax. Not to be surrounded in body guards but shaking hands with the fans. We’re all here to keep the mountain sands and ocean that scream aloha alive. You sure as hell know, everyone will be right back with the palm trees and ice-cold coconuts to watch the surf tomorrow.