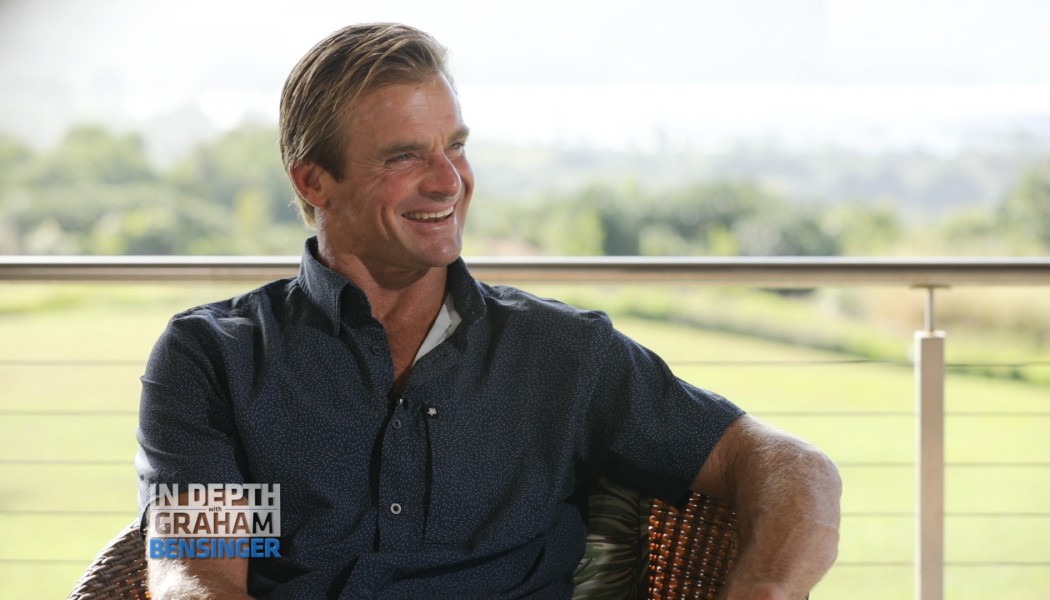 Graham Bensinger Goes In Depth With Laird Hamilton: Past, Present and Future. 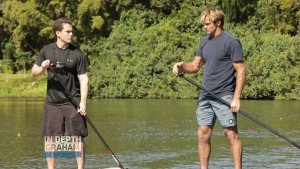 Laird shows Graham Bensinger his paces on a Kauai waterway.

In the winter of 2018 Bensinger spent two days with Laird and his wife Gabrielle Reece-Hamilton at their winter home on Kauai.

They filmed at his rental home because he’s currently having a new home built nearby. Most of their time was spent at Laird’s barn/workshop.

The interviews came in the midst of XPT (Extreme Performance Training) Kauai, so Laird was pretty tied up with leading that the majority of the time (clip here). Laird also went foilboarding with Terry Chung and took Graham out paddleboarding (clip here).

Relaxed and ready to talk, the extreme sports icon opened up with stories on:

In Honolulu, the full episode airs Sunday night at 10:30P on KGMB (CBS).

In L.A., the episode airs Saturday night at midnight on KTTV (FOX). 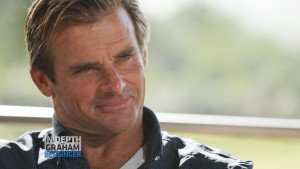 Laird smiles often and big. He seems a happy chap, but it wasn’t always thus.

Laird Hamilton went to high school on the island of Kauai in the 1980s. If you imagine him enjoying an idyllic education in a small schoolhouse overlooking Hanalei – you would be very wrong.

Laird attended Kapaa High School when it was the third most violent school in the entire country. Worse than all those hell holes in Queens and Detroit?

In this excerpt, Hamilton opens up about being bullied throughout his school-age years and how it led to him dropping out:

Hamilton: It started in kindergarten and then just worked its way on through middle school all the way to high school, until eventually I think I just got to the point where I got tired of it and thought maybe I shouldn’t be at the school.

Bensinger: And explain like why they would do it and what would actually happen.

Hamilton: … It was real simple: The reason why I was kind of picked on and picked out was I was just different. And my difference was that I was blonde and light skinned…

It’s not anything I think that many people haven’t experience in their life. It’s just something that they might not connect to me… You look at me you think – ah surfer guy and the beach. How is there any kind of racism? … It goes across all platforms.

Gabrielle Reece-Hamilton explains the perils and pleasures of marriage to Laird (Larry?)

When Laird took off on that Millennium Wave at Teahupoo in the summer of 2001, he was propelled by the emotional thrust of a troubled marriage. When he came out of that life or barrel in one piece, Laird broke into tears. And the reasons for that were exposed in Bensinger’s conversation with Laird and his wife Gabrielle Reece-Hamilton (aka Gabby)

In this excerpt, both Hamilton and his wife Gabby Reece candidly offer additional perspective on a divorce scare in January 2001 and how they got through it:

Hamilton: I think my attitude was – I was a little, maybe not appreciating and maybe just a little self-destructive… Too much pinot noir maybe or something… driving fast, [a] little reckless… Just my kinda my go-to, throw all the chairs out the window kinda thing…

I could drink a couple bottles of wine every single night, wake up at 5 o’clock and train for five hours and ride giant waves and do that for years on end. But, the residual effect of that on my family and my friends is not productive.

Reece: … Laird was really battling, ‘Who do I wanna be?’ And ‘who am I?’ And ‘who was I?’ … And so I think people they use alcohol, they use anger, they use a lot of things to cope with that.

Bensinger: … He was open about it, that he’s drinking a couple bottles of wine a night, every night.

Reece: Oh yeah, he was a lunatic. Did he tell you about Larry?

Bensinger: Who? No, who’s Larry?

Reece: That’s the guy who drinks the wine. It’s not Laird, it becomes Larry. It’s like a running, terrible joke that’s funny now…

Bensinger: So how would he become?

Reece: It’s like this weird change in your personality. So it’s your shell… he’d be like, ‘Larry’s here.’ It’s just so intense… I remember thinking, ‘He’s a really smart guy. I hope he can pull it’ … And Laird pulled it. I think he decided, ‘Oh, this is going to ruin my life and my family.’

Is there something wrong with Laird? Or right? He seems okay with it – whatever it is.

ASPERGER’S OR BIPOLAR OR SOMETHING

In this chart, the G for Gifted certainly applies to Laird, but what about the other letters, and what they represent.

Is Laird Sensitive to criticism? Go criticism him and find out.

Is he Rigid? Not when he’s surfing Pe’ahi or Teahupoo.

Is he Easily distressed? Uh, not likely, or he wouldn’t be hotdogging 30-foot waves at Pe’ahi or pulling into life or death barrels at Teahupoo.

Clearly there is something different about Laird. Some says it’s Aspergers, others suspect he is bipolar.

Or maybe he is just driven to greatness by inner voices made louder by a disfunctional childhood, bullied teenager years and the desire to do well for his family.

Hamilton says that his behavioral traits – whether a form of Asperger’s or something else – are the reason he’s accomplished so much.

In this excerpt, Laird describes what makes him tick.

Bensinger: With regards to your personality, One friend told me he thinks you’re bipolar. Another said he thinks you have a low-grade form of Asperger’s.

Hamilton: … Whatever I have, is working… I probably have a little of everything I would think… I mean, I’m able to actually survive in the way our culture’s set up and yet still have some of these traits that benefit me when I’m out in the giant ocean and so on.

In Honolulu, the full episode airs Sunday night at 10:30P on KGMB (CBS).

In L.A., the episode airs Saturday night at midnight on KTTV (FOX).