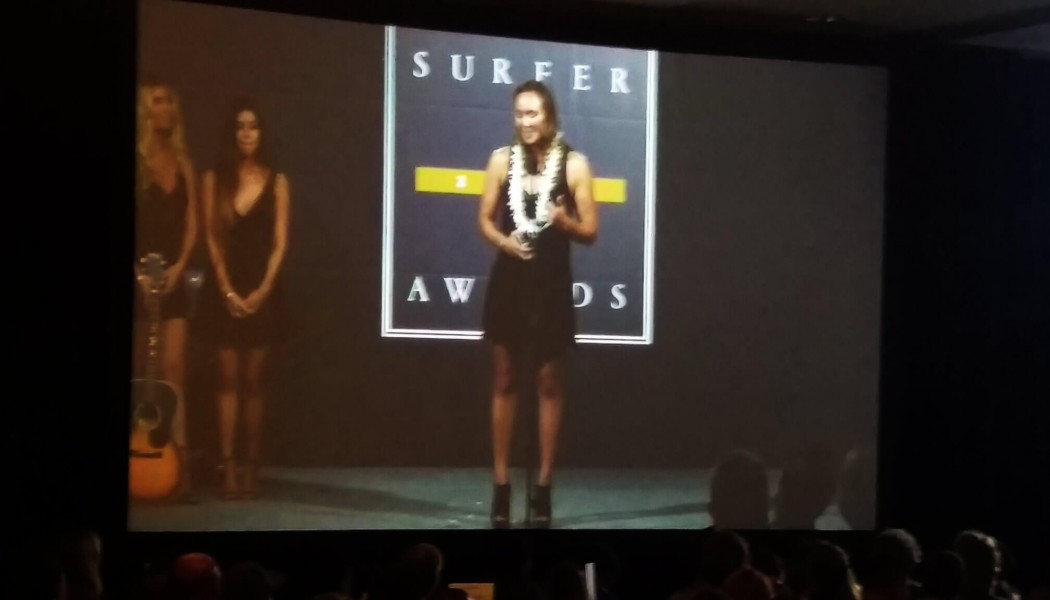 The 2016 Surfer Awards at the Turtle Bay Hilton 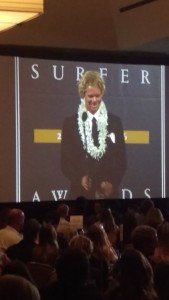 And have a party.

It worked, and it’s still going. The first year was 1996, during the Huntington Beach pro contest – whatever it was called then. Everyone was in town, so we combined the Surfer Video Awards with the Surfer Magazine Reader’s Poll – which had been going strong since the 1960s – except for a soulful blackout during the 1970s, when being cool and popular wasn’t cool or popular.

In 1996 we were winging it. We edited the show offline – plugging in big, bulky Beta tapes – with an editor named Fran Battaglia. (The following years we upgraded to Avid – my introduction to the wonders of digital editing. I call it “The One Yard Stare.”)

And we experimented with a couple of comedy categories:

The Trophee du Beavis and Butthead rewarded the dumbest, most illegal, most dangerous act captured in a surf video. There were lots of contenders.

The Jeff Spicoli Memorial rewarded the surfer who most lived up to the dopy surfer stereotype laid down by Sean Penn in Fast Times at Ridgemont High.

Those first years were fun because this was before the Internet and webcasts. It was just one night to an enclosed, drunk, rowdy audience who probably wouldn’t remember anything – so we used whatever movie clips and music we wanted, and didn’t worry about clearing anything.

Each show had an opening montage set to music. The first year we used Rockaway Beach by the Ramones – and that worked. Or maybe it was California Sun. Whatever, the Ramones are the world’s greatest greaser surf band that aren’t a surf band. The Ramones rocked the house and got the party started right. I remember we used The Ocean by Led Zeppelin for another show, and I don’t remember the others.

(Steve Hawk was editor of Surfer Magazine then. He read this and said The Ramones song was California Sun and we also used White Lines by Grandmaster Flash. Yep. White Lines was inspired by the Runman videos in the 80s.)

I was the host (I am not afraid of public speaking). We were organized but still winging it and we all feared the whole elaborate show might go over like a lead Zeppelin. But it went way better than that.

The Trophee du Beavis and Butthead brought down the house: Randall getting his hair lit on fire from the …Lost videos. Brock Little and Matt Archbold crashing a jeep in Costa Rica. Brock Little (again) and Jeff Clark and them putting a can of propane on a campfire in Alaska and shooting it with a rifle – the explosion was cool, and you could hear hot shrapnel zizzing past the cameraman.

(When Brock was dying of cancer this time last year, he said he should have died a hundred times for all the stupid shit he pulled in his youth. He’s right. He should have.)

Don’t remember who won The Jeff Spicoli Memorial. Maybe it was Occy.

I would crack a joke. People would roar. It was a rush. I can see why performers get addicted to that. Halfway through, Brock Little came running backstage and was frothing: “It’s over the top! You’re killing it!!!”

We did kill it. That was a great show and the Surfer staff were heroes and we were all buzzing for a week.