New Name, New Venue and No Teahupoo for the 2018 WSL Big Wave Awards

Ian Walsh flying through the barrel of the day/year/century at Pe’ahi: deserving winner of the Best Tube and Ride of the Year at the WSL Big Wave Awards. Photo courtesy World Surf League.

It was a cold and clear, full moon night. One of those brisk spring nights that make you glad to be living in Southern California, glad to be a surfer, glad to be going to a cool party on a cool night with cool people, tasty waves and a cool buzz.

For many many years the XXL Big Wave Awards were sponsored by Billabong and held at the Grove Theater in Anaheim – a location that happens to be just about as hard to get to from Malibu as anywhere in So Cal – a pain in the arse, even on a weekend.

The XXL Awards of the past were a real big show, with thousands of people on the list, lots of drinking and schmoozing, a webcast. Garrett McNamara showing up in helicopters and McLaren’s – a roomful of noise and dangerous boys and girls.

(And if you are hipsterallergenic, those shows could be hellish – a tsunami of tattoes, topknots and twits)

But this is the new-look, downsized WSL Big Wave Awards, which were presented to an elite invite list of maybe a couple hundred insiders – where the XXL Awards at the Grove were on for young and old, as the Aussies would say.

No webcast. Some schmoozing. Way more low key, and a lot easier to get to and get into if you were coming from Malibu.

It was a really nice night, with that cold breeze and the full moon. Something about those cold Los Angeles nights.

The money is still big, however, as $350,000 in prizes was handed out to surfers and photographers/cinematographers. 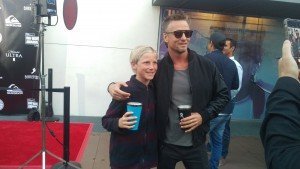 This Big Wave Awards began with schmoozing and red carpet festivities around 6:30. Free tacos and drinks were there in the parking lot, and then up in the outdoor area, a lot of well-dressed, healthy boys and girls – some of them famous for riding big waves.

There was a red carpet and if you looked at the right time, you would see tow partners Carlos Burle and Maya Gabeira being interviewed at the same time for Brazilian TV, most likely. 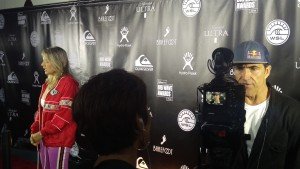 Walking through the open cubicles of the Red Bull HQ, it looked like a cool place to work – if you’re the sort of person who is into having a job and working and whatever.

The show was held in a small, roped off area, with one big screen behind and a couple to the side. This felt more like some high school deal or a revival meetin’ than the world famous XXL Big Wave Awards – but the intimacy was different and refreshing after the thruster-f#$% at The Grove in Anaheim. 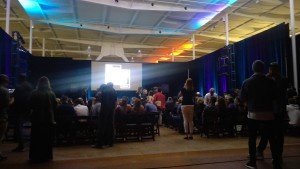 The host this year was the Charming and Glamorous Peter Mel – Mavericks surfer, former commissioner of the Big Wave World Tour and now WSL announcer for the World Championship Tour.

Peter goofed up right off the bat, bringing out Maui locals Billy Kemper and Paige Alms as the 2017 Big Wave World Tour Champions, before showing their highlight clips.

They got that done, then Kemper and Alms said a few syllables and threw the Maui Power sign, and it was on to the next.

Looking at the night as a whole, it was dominated by nominees from Jaws and Nazare. There were absolutely zero waves from Teahupoo – which was weird and probably a first – a few glimpses of Mavericks, no Dungeons, not a lot of Shipstern’s Bluff, no North Shore at all.

For example, the Ride of the Year Contenders were Ryan Hipwood and Ian Walsh at Jaws and Ross Clarke-Jones and Sebastian Steudtner at Nazare.

(Ross Clarke-Jones went right on a bomb at Nazare which could have been very hazardous to his health if he’d been caught inside. The guy is 50+. He’s gnar!)

Kai Lenny’s long barrel at Nelscott Reef in Oregon being the odd one in that Ride of the Year group.

Probably the best-received wave of the night was Ian Walsh paddling into a bomb at Pe’ahi and pulling into a long, big, deep, high-line barrel and coming out the end looking soooo money.

If that had been a six-foot wave at Backdoor it would have been rad, but this was a windy bomb at Pe’ahi during an event. Adrenaline much?

Walsh’s barrel surprised no one when it won Ride of the Year and Tube of the Year and there was much rejoicing: “After I reflect on that wave, from start to finish, I really utilized every bit of good and bad in surfing I’ve had my entire life — all into one moment,” Walsh said. “I feel like in a lot of ways more than catching this wave, this wave caught me. It’s a great snapshot of the camaraderie of our sport — and I feel like we all rode this wave together as a unit.”

No surprise when Andrew Cotton won Wipeout of the Year for getting absolutely destroyed by the lip at Nazare and then bounced 15 (?) feet in the air and out into the flats. That wave could have and probably should have killed Cotton, but he walked to the stage, accepted the trophy and check, and thanked everyone involved in his rescue and recovery – which is ongoing, six months later.

Cotton might have surpassed Jay Moriarity’s infamous Mavericks over the falls for Worst Cold Water Wipeout Ever with his shenanigans at Nazare. It was really heavy. Maybe he should have gone right.

Anyone who has dealt with the Maui wind in any form can understand how hard it would be to paddle into a bomb at Jaws. Aaron Gold was nominated twice for Biggest Paddle at Pe’ahi but he only won once.

This was a big night for the Maui crew.

Mavericks showed face with Lucas “Chumbo” Chianca’s Biggest Paddle nomination. That didn’t win, but the determined Brazilian was rewarded for spending the winter zipping around the Pacific with the Men’s Performer of the Year. He wrapped himself in the Brazilian flag and was jazzed about it all: “Last year, when I got second, I tapped the door, I didn’t hit the door,” Chumbo said. “This year I had to hit the door with power and I tried my best and trained so much.”

Paige Alms won the Women’s Performer of the Year award and was graceful in victory, although she did nudge the WSL to hold more women’s events. Please? There will be one at Mavericks next year as that spot is back on the WSL agenda, after much wrangling.

Nazare is a place that completely lives up to the hype. The waves look impossibly huge and cold, and they are – and it’s a fricking beachbreak. Paddling into the place is lunacy, but so is towing on those giant, cold, windy days.

Nazare killed Maya Gabeira but she refused to die, and others have come close.

Brazilian Rodrigo Koxa nearly got killed at Nazare in 2014 when he was barely saved from a trip through the rocks – which is almost certain death if you’ve ever seen the place. It’s that gnar.

What didn’t kill Koxa made him stronger and he won Biggest Wave by towing into a wicked Nazare bomb that was measured at 80 feet – breaking Garrett McNamara’s 78-foot record. 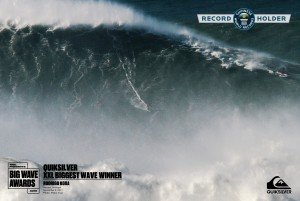 So Koxa was pretty jazzed accepting the award and check – which will go a long way toward chasing waves next winter: “I had an amazing dream the night before,” Koxa said. “Where I was talking to myself, ‘You gotta go straight down. You gotta go straight down.’ I didn’t really know what it meant. But I figured somebody was talking to me. When I got my wave, I let go of the rope, I started to use my rail to angle towards the shoulder, but then realized, if I used my rail, I’d never get deep. And then I remembered: ‘go straight down.’ When I said it, I remembered my dream. I turned and I almost fell, but then I got my feet again and went super fast. I’ve never had a big wave like that where I didn’t use the rail at all. Just went straight down. It was amazing.”

And that was that. The WSL Big Wave Awards – Volume One. Over and done in a couple of hours. There was some milling about in the cold, clear, crisp full-moon night, and then everyone disappeared into the mean streets of Los Angeles, to dream of big waves to come.

And the WSL Big Wave World Tour, which will start with Mavericks, and hopefully 2018/2019 will be better to the north Pacific than this year.

TUBE OF THE YEAR AWARD WINNER

WIPEOUT OF THE YEAR AWARD WINNER

RIDE OF THE YEAR AWARD WINNER